Scara robots are 4-axis Industrial Robots. Scara stands for: S elective C ompliance A ssembly R obot A rm. The shape of the SCARA robot is reminiscent of an arm, but in comparison to other articulated arm robots it works with only four axes: three axes of rotation and one linear axis. SCARA robots are robots with a very special design that is related to human joints, which is why it is also called horizontal articulated arm robot. He is often responsible for certain joining and pick-and-place tasks in assembly. SCARAS are very robust and space-saving.

Principle of operation of the Adept Scara robot

Structure of the SCARA robot:
This type of industrial robot stands on a fixed robot base, the first axis is the swivel arm that can be rotated around the robot base. The second Scara robot axis is the articulation of the swivel arm. At the end of the second arm, the vertical and rotatable Z axis is attached, at the lower end as an end effector z. B. a gripper can be mounted. As the fourth axis, this can also perform linear movements. 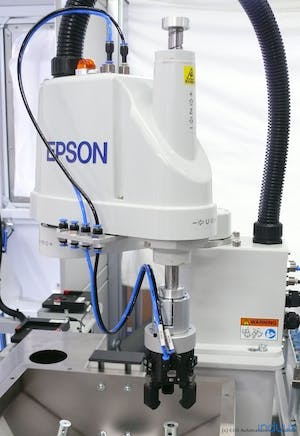 SCARA robots usually have the task of moving a workpiece from a defined position to the assembly location and joining it from above. Horizontal transport and vertical joining are the movements of these industrial robots. The robot controller takes over the motion control in the railway sector. SCARA robots generally only have holding brakes on the Z-stroke spindle, all other electric motors are not braked. They are available in different designs as floor units, wall units and ceiling units.

SCARA robots are used where maximum precision is required. Due to the high speeds and the precise and powerful Z-stroke movements, it is mainly used in assembly and joining tasks as well as for quick pick and place tasks, but also positioning, palletizing, emptying, filling' ' 'and sorting are possible areas of application. For example, they can be ' multipole ' Plug connector. This type of industrial robot can even help in the manufacture of solar modules. In addition, they can be used for the assembly of products with short life cycles. These types of industrial robots are used in a wide variety of industries - food, medical, pharmaceutical, plastics and electronics - and are available in the payload range up to 20kg and range up to 1000mm.

The following are advantages and disadvantages for choosing the right robot for the application:

FIG
According to the navigation, ABB's business areas include electrification products, robotics and drives, industrial automation and power grids. The drive and robot technology includes motors, drives, generators, robots, traction converters and converters for wind turbines. Scara robots of the IRB series, palletizing robots, painting robots and 6-axis robots can be summarized under ABB's umbrella term robotics. As standard, the Scara robots are protected against the ingress of liquids and dust and the internal compressed air supply and signal lines are combined on the outside.

KUKA
Kuka offers the KR5 Scara, which promises fast and resilient use for small applications.

Robotif
Robotif is a service provider for on-site emergency repairs, maintenance, procurement and installation of spare parts for industrial robots. They also offer training on how to pass on their know-how. Sometimes repair packages for the Scara robots of the Adept Cobra and Stäubli RS and TS series can be purchased.

Stäubli
The SCARA robots are extremely robust, have a compact design, work at high speeds and are suitable for low payloads. Stäubli also offers the modular CombiTac multi-coupling for energy and media circuits. The individual, combined modules in a central mounting frame create individual solutions, adapted to every customer request. Stäubli guarantees high process reliability in the following application areas and sectors: chemicals, ' motorspot ', aviation, steel industry and in the nuclear industry.

Epson
Epson offers over 300 variants of SCARA robots for assembly, test and measuring cells with different ranges and a load capacity of up to 20 kg. A special model are the Spider robots, which reach all positions of their action space with 100% accuracy with their cylindrical work area and the Scara G3-351s series. In addition, Emson offers under the Icon for accessories POWER AND SIGNAL CABLE SETs for between 250 € and 430 € excluding VAT, printer and 3LCD - projectors for business and end customers. The detailed Product overview is visible on the website.

Comau
Comau is an Italian automation company and develops SCARA robots as well as the Rebel.

There are many ways to purchase SCARA robots used online. Robotsale.de, robot partners, machine seekers and resale are just three of them.

This page has no attachments yet but you can add some.