Gripper / effector of a robot

The gripper is part of a robot and often indispensable as the last link in the kinematic chain, for example it holds the workpiece or tool that is to be processed by or by the robot. A gripper belongs to the environment of the gripping technique and is similar to the human hand on the arm. 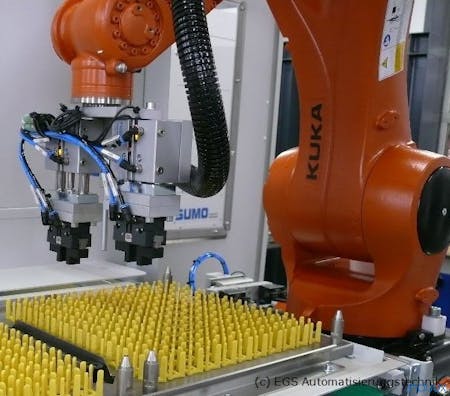 For Industrial robot the gripper is an indispensable element, it is at the end of the kinematic chain. The gripper is the part of the robot that performs the actual task and only then turns the robot into a functional machine. The gripper normally sits on the outermost or last axis of the robot and is connected to the power line. Grippers thus serve for the interaction of the robot: for gripping, machining or turning a workpiece or tool.

Grippers can be differentiated based on their effect. The various gripping (er) systems are mechanical, pneumatic, magnetic or adhesive.

Gripping systems can be described as organs of a robot. The individual elements include Actuators / effectors and auxiliary devices such as wrist axes, changing systems, joining aids, protective devices and sensor units.

The subsystems of the gripper

A gripper consists of different subsystems: the active system (1), the drive system (2), the kinematic system (3), the carrier system (4) and the information processing system (5) (see figure).

subsystems of a gripper simply shown

The drive system generates the energy required for the entire gripping process. This enables the workpiece to be opened, closed and held by the gripper. The energy supplied can be mechanical, hydraulic, pneumatic or electrical. In the drive system, the energy is then converted into mechanical energy (e.g. rotary movements).

The information processing system collects important data via sensors (e.g. status of the gripper, position of the workpiece, parameters of the gripping task). The information collected is then adapted, amplified, evaluated and transmitted to the control.

Areas of application for grippers and associated gripper systems

Since grippers are a central element of robots, they are logically used wherever robots are used, i.e. primarily in industry. There, the possible uses extend to all branches of industry: from the food industry to automobile manufacture. Various grippers are listed below and in which area they are used:

Nowadays, human-robot collaboration (Human-Robot Collaboration) is also an important topic. Not only the collaborating robots (Cobots) themselves, but also the gripper on the robot must ensure safe collaboration with humans. The video shows working with a collaborative gripper system in the application.

ROOM GROUP
The Zimmer Group is one of the world market leaders with a focus on gripping and swiveling technology and the “end of arm tooling” on robots. From development to final assembly, mainly pneumatically and electrically driven handling components and systems are sold. Customers include the robot system houses, portal builders, assembly plant builders and chaining the plant architectures. The product range includes over 3,000 standardized handling components available in a modular system that can be built into systems by the Zimmer Group or the customer.

FAUDE
FAUDE has been present in the field of automation technology for over 25 years. For some years now, especially in robotics. For gripper systems, FAUDE offers both robot grippers and vacuum suction grippers.

FIPA
FIPA is a manufacturer in the field of vacuum technology and end-of-arm tooling. In the area of gripper technology, FIPA offers various gripper systems such as Angle gripper, Manget gripper, gripping tongs and gripping fingers.

FAIRY
F.EE is a specialist in automation technology with over 1,000 employees. In the mechanical engineering division, in addition to traversing axes, brackets and other accessories for robotics systems, robot grippers are mainly designed and manufactured for handling and assembly tasks based on an aluminum profile system based on a modular principle.

Schunk
Schunk is a specialist in the area of gripping technology. With over 3,000 employees, Schunk now operates internationally. The company offers the world's largest range of gripper systems and clamping technology and delivers its products to customers in automation technology, robotics or plant engineering. For example, Schunk manufactures angle grippers, parallel grippers and centric grippers.

AGS
AGS Automation offers gripper kits with over 2,500 components - this makes it easier to assemble gripper systems into one product.

Gripping pliers, gripping arms or grippers are also manufactured, used and distributed in the non-industrial sector (Amazon, Ebay, office / hardware stores). These are usually simple, human-operated tools such as grapples or other gripping tongs.

This page has no attachments yet but you can add some.
Retrieved from "https://wiki.induux.de/index.php?title=Grippers&oldid=726"
Category: